Recently, it has been published in Science a study that assess the global extent of dryland biomes, with a particular focus on their forests (The Global Dryland Assessment of Forests). This work, published by Jean-François Bastin and colleagues, shows that the extent of dryland forests (henceforth dry forests for simplification) has been underestimated in all previous studies published to date, and reports that these forests might cover some 1079 million hectares, an area similar to the area covered by tropical moist forest worldwide. This would imply a subestimation of about 40 to 47% in all previous estimates of dry forest extent, corresponding to 467 million hectares of forest that have never been reported before.

This paper had a huge media impact, and newspaper articles were published showing glossy baobabs as if they would have appeared out of nowhere as mushrooms after a rainy day. 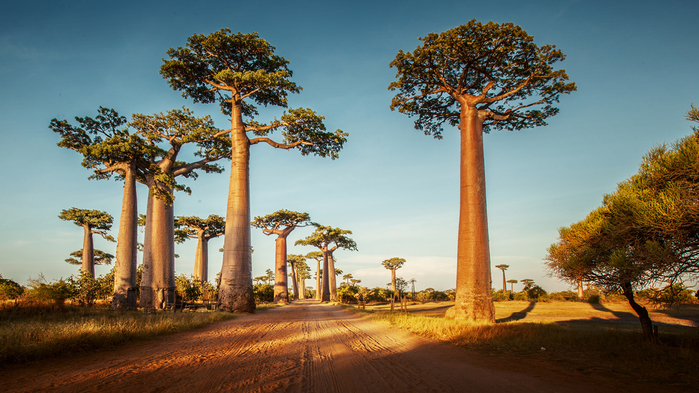 Baobab forest, one of the new “dry forests” rediscovered by Bastin et al. (2017).

But, how is this possible? Thanks to Google Earth and the thorough effort of many working groups distributed all around the world, which have invested a lot of time in analysing as much as 210,000 Google Earth images, covering each one a small extension of 0.5 hectares (so this makes up 105,000 hectares, or which is the same, 1050 km2). Based on these results, they make extrapolations to all the world drylands and … voilà!

When we first read the paper, some colleagues and I were impressed by the novelty of such results, but a more detailed reading made us fall into a few ackward facts. The map showing the extension of dry forest showed some inaccuracies at first sight, the most striking one was a huge spot covering a large portion of the Peruvian and Ecuadorian Amazonia (including ALL the Yasuní National Park), regions where we have been working during the last years. They report dry forests in tundra areas of northern Europe and North America. On the other hand, the new map of dry forests by Bastin et al. does not include key tropical dry forests of the Pacific Central American region. So what is going on? The main problem is that the map of Bastin et al. was based on the delineation adopted by the United Nations Environment Programme World Conservation Monitoring Centre [(UNEP-WCMC)] from 1991. This map, initially created with administrative and operational purposes, includes as drylands many areas that are not. This map was never validated on the field and/or by experts, and to our knowledge, it has never been used (and cited) in another scientific study, all of which made us suspect about its validity and usefulness. Additionally, Bastin et al. has not bothered either to validate this map through, for example, cross-checking with the map of ecoregions of the world.

Against this background, some colleagues and I decided to re-elaborate the map of global drylands using current climatic data and using the same criteria followed by the authors. Our first surprise was that 10% of the images (22,000) used by the authors were really outside drylands. When crossing the drylands map of Bastin with the ecoregions map, we realised that they had included 56% of world flooded grasslands, 10% of moist broadleaf forests, 23% of mangroves, and 51% of temperate forests as “dryland areas”. In fact, placing the studied plots over the ecoregions map shows that almost 35,000 plots (i.e., around 17%) fall within “non-dryland” biomes.

A final caveat with Bastin study is that the authors do not consider seasonal dry forests, that is, all those forests where annual rainfall is not that low, but it is concentrated only in a few months of the year. This is the reason why their map lacks some important regions of dry forests in Central America and Mexico, as well as Southeastern Asia (which ultimately will not offset the overestimations caused by inclusion of many “non-dryland regions” as drylands).

So to summarise, it is hard to believe that there is truly so much unreported dry forest in the world as Bastin et al. claim. Because this kind of ecosystems are typically in highly humanised regions, have been subjected to high human pressure and deforestation, and constitute nowadays, one of the most imperiled ecosystems in the world. Therefore, the study by Bastin et al. is irresponsible, not only because they report misleading results, but most importantly, because they are offering arguments to belittle the conservation status of dry forests.

More information on our reply to Bastin study in Science.