From February 4th to 7th the I Congress of the Iberian Society of Ecology (SIBECOL) was hold at Universitat de Barcelona (UB). This congress was very special, since SIBECOL has been recently been founded from 4 scientific societies from Spain and Portugal devoted to the study of continental waters (AIL), terrestrial ecosystems (AEET and SPECO) and behaviour and evolutive ecology (SEEEE). The congress gathered nearly 700 scientists from Spain, Portugal and the rest of Europe and the world, highlighting figures like Pierre Legendre (University of Montreal), Jordi Bascompte (University of Zurich) or Oscar Godoy (CSIC- Spain) and fostered 27 thematic sessions where different issues where addressed: climatic change, tropical ecology, invasions, biogeochemical cycles, restoration, networks…

In this event, the European Ecological Federation (EEF) awarded the best oral presentation by a young scientist in the field of theoretical ecology with the Ramón Margalef Prize, consisting on 2000 euros to be spent in congress attendance or in courses or research stays for expanding the prize- winning ´s scientific and academic formation. The award´s call was opened for master students, PhD students and postdocs, and 24 candidates competed for it. 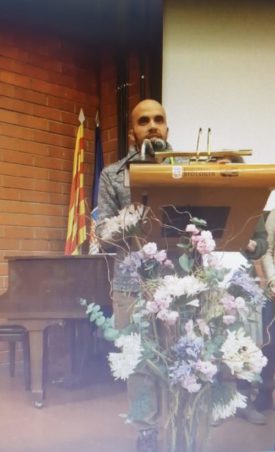 Guillermo, during his speech at the awards ceremony

However, Guillermo Bañares de Dios was the winner!! Guillermo, PhD student at Universidad Rey Juan Carlos under the supervision of Luis Cayuela and Manuel Macía presented his talk “Ecological mechanisms shaping woody plant community structure in tropical montane forests: a multi spatial scale functional approach”. On it, Guillermo introduced some of his thesis results, where he investigates the role of ecological mechanisms such as competitive exclusion and environmental filtering in community assembly, using tropical montane forests from Ecuador and Peru as models. Furthermore, UB professor Narcís Prat presented him with the book “Ramón Margalef, a biosphere´s ecologist”. We are sure that Guillermo will employ the funds wisely to participate some activities that otherwise hardly could afford, given the funding scarcity of PhD students in Spain. Congratulations Guillermo!!